The Outdoor Shower is Open! 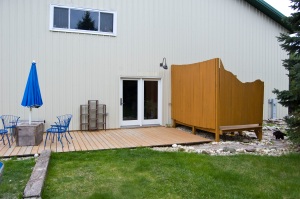 A few years ago while we were remodeling we didn’t have a shower so we had to come up with another option for one. Instead of creating a temporary outdoor shower we decided to do it right. We cut into the hot water line in the house and ran it into the outdoor shower. This way we wouldn’t be showering in the cold. When we started building the shower we planned for it to be spacious and to figure out a layout where you wouldn’t need to put up a shower curtain to cover yourself. We chose a layout where there was a smaller wall on the entry way so you were hidden inside. 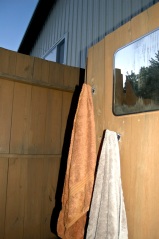 We knew that in winter we would have to have a way to shut off the water inside so we could drain the pipes outside. We’ve drained it well for the past two years but last year we forgot to drain the bottom screw on the shower and the pipe burst. Luckily we learned how to fix this sort of thing while we were remodeling our house. Once we had the right copper pipe replacement parts we were ready to go. It actually only took about a half an hour to fix it. Luckily we had a good helper while we were trying to get this done!

It’s been a little chilly out there in the morning but we’re back in business. Outdoor shower season is here!