Posts and tying the knot

We ditched the boys this weekend and road tripped it up to Minnesota for our friends wedding.  Recently, we found out our third baby who is due in September is going to be a girl! We’re still a bit in shock.. Two boys and now a girl. However, we decided before Liz got too big we would take a weekend to ourselves.

Of course our trips always end up with some bit of construction or farm aspect to it.  We have been building our deck out back and we’ve been stuck on finding the posts to use to hold up the metal roof. We’ve looked on craigslist, home depot and called billions of antique stores. We needed posts that were at least 7ft tall and we wanted some character. No luck anywhere!!

My Aunt and Uncle own an awesome antique store in Elk River, MN called Ella’s. So she started scouting around for them and a week ago she called saying she found some! And since we were coming up for the wedding it was fate! We got to Minnesota checked them out and they were perfect. They were 8ft tall and the woman was selling them for 25$ each. What?! Amazing!!

So, we loaded up the posts and headed off to the wedding. While we were driving we kept noticing people looking at us and were like that’s odd. Then we realized, “Oh Yeah, we have giant posts in our car.” 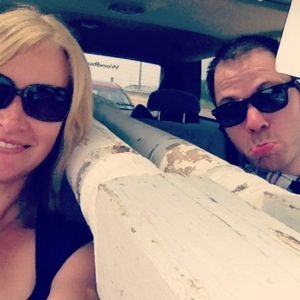 We got home from Minnesota around 3:00. After hugs with the boys we decided to sit out on the deck and check out our posts. Well, that turned into us starting to work on the posts and get them in! We really have a hard time waiting on a project when it’s right there. We measured up the posts, and then notched out the top where it was going to let the roof rest on it for maximum load support. In order to notch the post out we took our circular saw and made a bunch of small cuts at the correct depth and once that was done they all snapped out perfectly. Then after that all that was left to do was to use the bracket to attach it on the bottom and we screwed it in at the top. Done! Next step… Metal roof.