Bad day for the baby goats

For the past couple of weeks I’ve had the goats in the back of my mind. When your goats are a few weeks old people dehorn or disbud their goats. This means that you use a dehorning iron and burn the small horns that are just growing in so they don’t grow horns. After reading up to see if I really needed to do this I found out people disbud their goats for basically 2 reasons:

1. When the goats are older they could butt you or other goats with the horns and really hurt someone. After seeing the goats butt my boys when they are littler I really didn’t want that to happen with horns. Ouch!

2. They could get their full-grown horns stuck in the fence and hurt themselves.

We did have baby goats once before and thankfully I have a goat guru who has shown me the ropes. Last time she came to our house and debudded them but I was working so I didn’t get to see it done. About a week ago when I was milking and feeding the goats I looked down and realized that they were already growing horns. The older goats horns were big… oh no, I thought I had missed my window to do this. I called up my goat guru and she said, Bring them down!” Thankfully she would show me the ropes before I had to do them on my own. 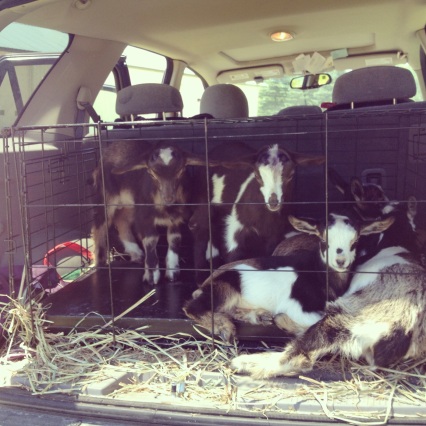 I packed the boys and the goats into the car and headed down to Pricker Patch Farm in Caledonia. We got down there and she walked me through shaving the fur around the little buds of horns and then making sure the dehorner was hot enough and then how to do it. It’s not the prettiest or calmest of things but it had to be done and she made sure to do it as gently as possible… if that really is possible. She said the horns were a little bit bigger but that she just did the area a little wider. 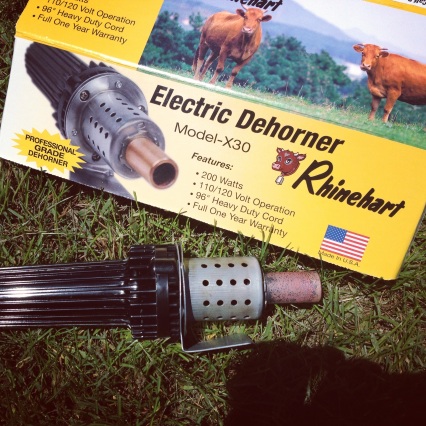 While we were disbudding one of the goats we walked over to the crate I had brought and 3 of the other goats had gotten through the side. Oh man. We tried to surround them for a while and then she enlisted the help of her children. Her daughter spent a good 15 minutes chasing the last goat we couldn’t get who was weaving under and circling the car. The last thing I thought I would be doing when I was 5 months pregnant was crawling under my car trying to catch a goat! Oh the little surprises! Ha ha ha. Luckily she had two other sons who were nice enough to play with Stone and Crosby during this whole time which worked out perfectly! 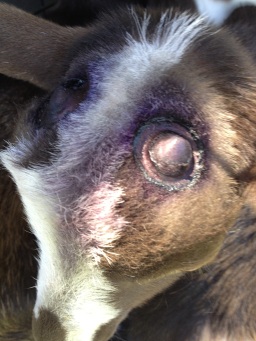 After all was said and done she got out some purple numbing and antiseptic spray for the areas we disbudded and that was it! Now next time we have babies I’m going to be on my own! 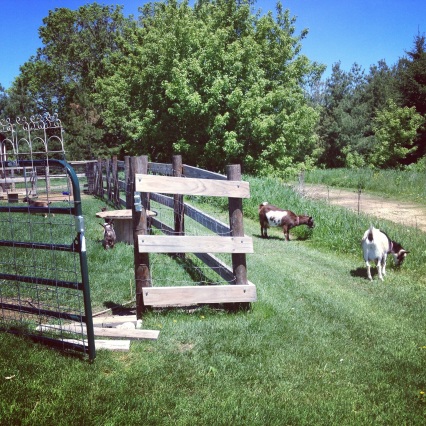 Also about a month ago this same Goat Lady called me and asked if I wanted a pair of white turkeys that she has had for a while. We said sure and so after Sally the mom turkey hatches out some eggs she’s been sitting on we’re going to get Sally and Chester the grown turkeys and a bunch of chicks! I never knew that full-grown male turkeys get a huge sprout of black chest hair. It was crazy! (That’s why they named him Chester) We’ll show you some pictures of the duo once they come to our farm in a couple of weeks.